Organised crime groups are turning to ever more dangerous and un-seaworthy boats in efforts to smuggle people across the Channel to the UK from France, the National Crime Agency has warned. 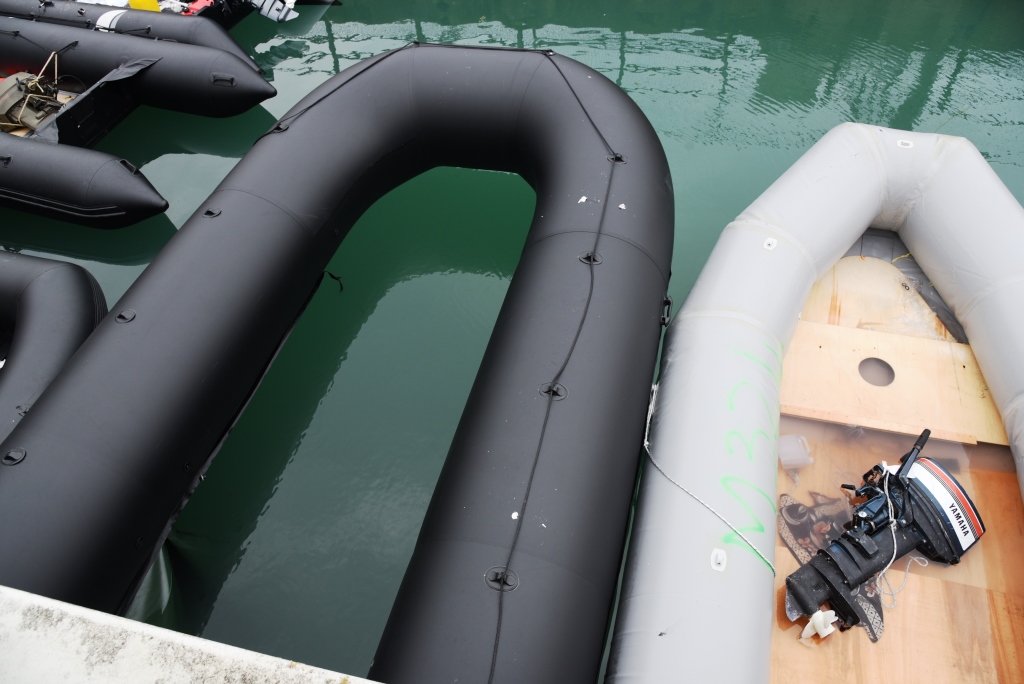 Recent months have seen a trend towards larger inflatables, sometimes up to 10 metres in length, being used. The NCA believes many of these large grey or black unbranded vessels have little or no commercial use, and are being purposefully manufactured for people smugglers.

Other boats are also being adapted or improvised using sub-standard materials in attempts to increase capacity and improve rigidity. During one attempted crossing in July this year the flimsy plastic bottom of a boat simply gave way, plunging the occupants into the water. Fortunately they were rescued by Border Force.

And several boats intercepted in the days just before a similar vessel sank in the Channel leading to the deaths of 27 people were held together using strips of gaffer tape.

On 29 November the Agency issued an alert via Interpol to worldwide law enforcement for them to share intelligence about the supply of boats and encouraging them to ask suppliers and retailers in their jurisdictions to be on the lookout.

“It is clear to us that with some of the boats being used there is little or no genuine commercial use for them.

“They are likely being manufactured and sold online for the sole purpose of being used for people smuggling, and this is now something we are focusing on.”

The NCA assesses that a high percentage of attempted Channel crossings are still facilitated by organised criminal networks of varying sophistication.

The Agency continues to look at disrupting the supply of vessels to criminal groups and target those who knowingly do so.

In November the NCA worked with French police on an operation which  dismantled an organised crime group involved in supplying boats able to carry between 40 and 60 people, and then recruiting people from camps in northern France to travel in them.

18 people were arrested in the Calais, Le Havre and Paris regions of France.

“The recent tragedy in the Channel is a devastating reminder of the dangers of Channel crossings choreographed by organised crime groups who are profiteering from these deadly and unnecessary Channel crossings.

“We work closely with our European and international partners and police, hand-in-glove, day in, day out to arrest, investigate and prosecuting organised criminals, preventing numerous departures and saving lives.

“But this is a complicated issue and we are determined to do all we can to work with the NCA to tackle criminal gangs and prevent further loss of life.”

Earlier this year the NCA issued an alert to the UK maritime industry to raise awareness around organised crime activity linked to small boat supply, and continues to work with partners in the EU to do similar there.

“While the events of last month in which at least 27 people died were an absolute tragedy, unfortunately it was not a surprise when you consider the types of boats we have seen people being put in. Frankly, they are death traps.

“If you add that to the increasing crowding we are seeing on these vessels, and the poor weather and colder seas of winter, it all adds to a greatly increased risk.

“It demonstrates further to us that the people smugglers involved in these crossings don’t care about the wellbeing of those they put on the boats. They don’t care if they die. They just want to exploit their desperation for money.

“I would also re-iterate our appeal from earlier in the year to those involved in the maritime industry, both here in the UK and on the Continent. Please be on alert, and if you have suspicions around the purchase of the kinds of items that can be used in these crossings, please report it.”

·     Unusual combination of boats and equipment in one transaction;

·     Repeat purchasing of boats and/or equipment from the same retailer;

·     Lack of concern about the condition of the boat or equipment being purchased, or an indication that it may not be for the buyers’ use;

·     Customers wanting to complete their transaction and collection as quickly as possible.

The NCA alone has around 50 ongoing investigations linked to the top tiers of organised immigration crime, and since the start of the 2021 has been involved in more than 140 arrests.