Two men have been jailed following an investigation by the joint NCA and Met Police Organised Crime Partnership (OCP). 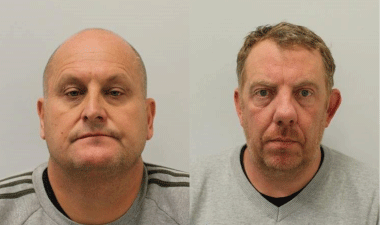 Officers observed Dean Melody, 46, from Hertfordshire, and Arthur Boxall, 52, from Essex, travelling north on the M6 motorway in two separate white transit vans towards Skelmersdale in Lancashire on 25 October 2018.

The following morning, both vans travelled back down the M6 and were stopped just south of the Toddington services on the M1. During a search of Melody’s van, officers found a locked chest behind the driver’s seat with a false compartment. Within this, 33 vacuum packed kilo blocks of cocaine were recovered.

Boxall’s van was also searched and an encrypted mobile phone was seized. Both were arrested on suspicion of conspiracy to supply class A drugs.

When tested, the cocaine was found to have a purity of between 60% and 95%, with an estimated street value of more than £2.6m.

Melody pleaded guilty before the trial began but Boxall was found guilty by a jury at Kingston Crown Court last month.

They were both sentenced at Kingston Crown Court on Friday and were sentenced to 12 and 22 years respectively.

“Disrupting the supply of class A drugs and the violence it fuels is a priority for the NCA and our partners. Drugs trafficking is a major source of revenue for organised crime groups, many of whom are involved in other criminality, and profits from illegal drugs are used to fund other criminal operations.

“The comprehensive investigation conducted by the Organised Crime Partnership has successfully disrupted an organised criminal network involved in the large scale supply of class A drugs. We have ensured that the 33 kilos of cocaine that Boxall and Melody were found with will not get onto the streets of the UK.”