The National Crime Agency has issued a wanted appeal after a man charged with firearms offences failed to appear at court. 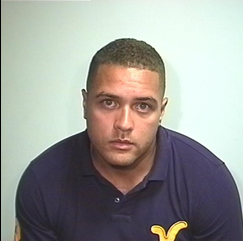 Clinton Blakey, 35, of Dunstarn Drive, Leeds, was due to appear at Leeds Magistrates’ court today [29 Oct] after being charged with offences relating to the supply of firearms in the Yorkshire and Merseyside areas.

Blakey is also wanted for breaching prison licence conditions and a warrant has been issued for his recall to prison. The NCA is appealing for information to help trace him.

NCA Operations Manager, Nigel Coles, said: “Clinton Blakey is suspected of being involved in the illegal supply of firearms is now trying to evade justice. We need your help to find him, so if you know where he is, or have any information that might help us catch him please get in touch as a matter of urgency.”

He is known to have connections in the Merseyside and Yorkshire areas, specifically central Leeds.