An international operation involving the National Crime Agency (NCA) has led to the seizure of just under 1000 kilos of MDMA and meth and the arrest of four British men in one of Australia’s biggest ever drug seizures. 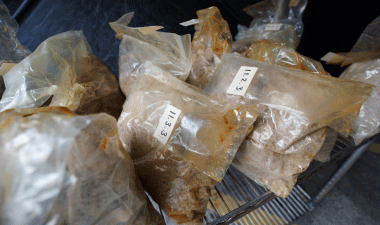 Four British men have been arrested in Australia and New Zealand following a drugs operation, supported by the NCA, targeting a UK organised crime syndicate.

Queensland Police, ACIC and AFP officers seized 766kg of MDMA powder in one of Australia and NZs biggest ever drug seizures on Tuesday. The drugs haul had an estimated value of 90 million Australian dollars (GBP £50.7 million).

The MDMA powder was the highest purity ever recorded in Queensland, as well as the largest seizure on record in the state, and could have made up to 12 million pills.

Two UK citizens were arrested in Queensland, a 51-year-old man and a 40-year-old man, as well as a 26-year-old Australian man.

Last week, two other British men, aged 60 and 49, were arrested by police in New Zealand after 230kg of methamphetamine was seized as part of the same operation.

Mark Bishop, Head of Asia and Pacific Region at the NCA, said:

“The seizure of such a large quantity of MDMA and methamphetamine is the result of a targeted, intelligence-led investigation, carried out by the NCA with international partners.

“While this operation took place on the other side of the world, it has tangible benefits to the UK public too. We were targeting a British criminal network, where the majority of the targets resided in the UK, and while these drugs were destined for Australia and New Zealand they would also have impacted upon communities in the UK too, with potential for the profits to be reinvested in further criminality.

"But this hasn’t ended - the operation continues to focus on targeting and dismantling this UK organised crime group to stop the harm they are fuelling and illicit profits they are making.

“Organised crime transcends borders, so it is important we work internationally to tackle it. With our Five Eyes partners, which include Australia and New Zealand, we have an active burden sharing arrangement and real time intelligence and capability sharing through the international liaison officer network, and are always ready to catch British organised criminals that pose a threat to the UK and elsewhere.

“We are constantly working with State and Federal partners in Australia and our partners in New Zealand to tackle those British, Australian and NZ organised crime gangs that threaten all our nations, be it for drug trafficking as in this case, child sexual abuse and exploitation, money laundering, cyber crime, modern slavery or any other organised criminal activity that targets the public.”