Five other men, all taxi drivers, detained at the same time have been released under investigation, as has a sixth taxi driver arrested separately in Bromley-by-Bow yesterday evening.

Hossain and Ullah are due to appear before Barkingside Magistrates tomorrow, Friday 21 May.

The two leading figures in people smuggling networks thought to be behind the movements of hundreds of migrants both into and out of the UK have been arrested by officers from the National Crime Agency.

The two men, aged 52 and 28 were detained on suspicion of conspiring to facilitate illegal immigration in NCA raids in Woodford Green and Bushwood, east London, this morning (Wednesday 19 May).

Another five people, all licenced mini-cab drivers, were also arrested by the NCA in various locations around east London. They are accused of being involved in transporting migrants to or from lorry pick-up and drop-off points. 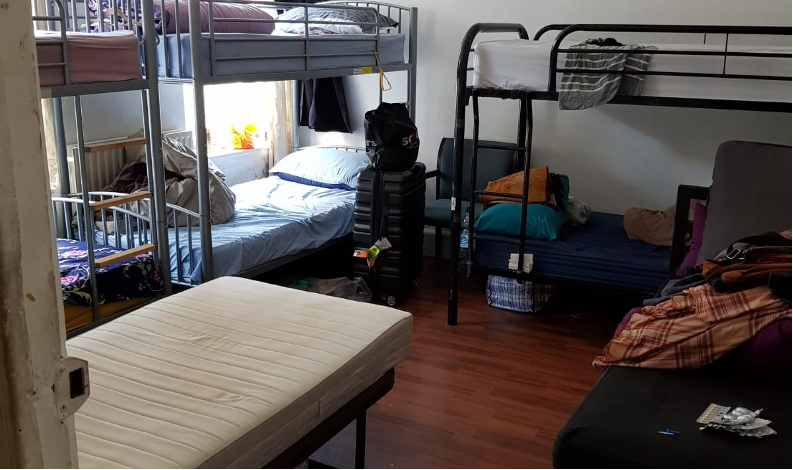 NCA investigators also identified a safe house in Mile End, in which 11 suspected migrants were detained. The property (pictured above) had been converted to accomodate at least 19 people, with bunk beds filling every room. Seven people were handed to the immigration authorities to be dealt with.

This morning’s operation, which involved more than 130 officers, follows a lengthy investigation by the NCA into the network, codenamed Operation Symbolry.

This identified an organised crime group with connections in both Europe and Asia, using a network of predominately Romanian lorries to move migrants across the Channel from France into Kent, or the other way round.

NCA Deputy Director of Investigations Chris Farrimond said: “People smugglers are ruthless, treating migrants as a commodity and they do not care about the safety of those they transport. We have seen this, tragically, in recent and historic mass fatalities.

“This is why tackling the gangs involved is a priority for us. The NCA alone has around 50 ongoing investigations into networks or individuals in the top tier of organised immigration crime or human trafficking – the highest harm.

“Working with partners both domestically and internationally we are determined to do all we can to disrupt and dismantle the organised criminal groups involved, and we will use the full suite of powers at our disposal.”

NCA Branch Operations Manager Chris Hill said: “Operation Symbolry is a significant investigation into a wide-ranging criminal network involved in people smuggling, moving migrants illegally in both directions across the border between the UK and France.

“We believe the arrests today, coupled with the actions we have already taken, will end the activities of that network.

“Organised crime groups often rely upon enablers such as complicit lorry drivers and minicab drivers to carry out their work, offering them money to help.

“What I would say to those drivers is that if they are approached, they should tell us, either by calling police on 101 or contacting the charity Crimestoppers anonymously.

“The penalties for drivers caught smuggling migrants are severe, and I would ask those tempted by the idea to consider the potential impact on their lives and livelihoods.”

Home Secretary Priti Patel, who accompanied NCA officers on today’s operation, said: “This is a significant win for UK law enforcement. The arrests secured by the NCA have broken up a callous criminal gang and put vile people smugglers behind bars.

“These criminal gangs don’t care for the people they traffic. They’re treating innocent lives as a commodity and lining their pockets while people are dying.

“That is why I am delivering our New Plan for Immigration to break the business model of the people smugglers and protect the lives of those they endanger.”

Operation Symbolry has already seen seven people, including six lorry drivers, arrested and charged with people smuggling offences. Five have been convicted, after their trucks were intercepted outbound and migrants were found in the rear.

They include Romanian national Marius Halmaghe, aged 36, who was stopped on the A2 in Kent on 1 October 2020, with four migrants discovered by police. He was sentenced to 31 months in prison.

Three days later on 4 October 29-year-old Alexandru Fuiorea was arrested as part of an intelligence-led operation on the M2. 18 migrants were found hidden in the rear of his truck, which was heading towards Dover. Fuiorea was given a sentence of three years and eight months.

On 6 November 2020 Mihai-Veleriu Postolache, aged 25, and his partner Roxana Gabriela Stan, 25, were arrested by the NCA after five migrants were discovered in their HGV as it entered the port of Dover. They would later be sentenced to 33 months and 14 months respectively.

Turkish lorry driver Hakan Zengin, 36, was arrested on 21 March 2021 on the M25 and found with seventeen migrants in his lorry. He pleaded guilty to immigration offences on 7 May and awaits sentence.

And 38-year-old Waqas Ikram has been charged with people smuggling offences after a lorry was broken into on 30 March 2021. Four migrants were later found after it was searched by police at South Mimms services on the M25.

A further two lorry drivers had previously been dealt with by the authorities in France.

In total Operation Symbolry has led to the interception of more than a hundred migrants. Three of those found attempting to leave the UK illegally were wanted by UK law enforcement.