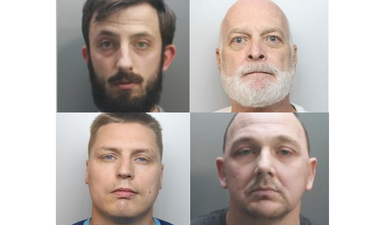 Members of an organised crime group that smuggled heroin into the UK have been jailed in a National Crime Agency investigation.

Stephen Hunt, 60, was a senior member of the group which planned to import more than 90 kilos of Class A drugs a week.

He liaised with contacts abroad, rented office space via a front company pretending to deal in household linen and worked with accomplices to have consignments of heroin delivered by fast parcel.

Using the handle Nobleblood, Hunt, of Main Street, Great Oxenden, Northamptonshire, rented an office at the start of last year in Huntingdon where parcels of heroin could be delivered.

He drove to the office in his white, convertible Mercedes AMG sports car where he was captured on CCTV – and his Encrochat phone messages revealed the OCG’s heroin would be forwarded to Liverpool where he planned to set up a new office. It’s believed the heroin was also being sold along the North Wales coast.

Other EncroChat conversations indicated the OCG was importing at least 24 kilos of Class A per week with plans to import more than 90 kilos per week.

The heroin came into the UK via Spain and the Netherlands.

Today, at Caernarfon Crown Court, Hunt, who lived in Spain between 2001 and 2014 was jailed for 10 years and nine months after admitting conspiring to supply class A drugs.

Alongside him was fellow OCG member Dylan Sanger, 34, of Bailey Avenue, Ellesmere Port.

Sanger used the EncroChat handles Syruproad and Swankyboar – he secured individuals and premises to receive the drugs, and organised cash payments to those involved.

When Sanger was arrested in August last year officers found around £9,000 hidden behind his car’s dashboard and £1,300 in his house.

He was jailed for nine years.

All the men admitted conspiring to supply class A drugs.

On 5 May last year National Crime Agency officers watched Holbrook-Harris receive a parcel from Barrett which had been delivered to Barrett’s home by courier.

The men were arrested in a pub car park in Mold with the assistance of North Wales Police. The parcel contained 9.45 kilos of heroin had a purity of 44% and a street value of £475,000.

The delivery was one of at least six the OCG had arranged with at least 18 kilos of class A drugs coming into the UK between January and May 2020 with a total value of £900,000.

Piers Phillips, NCA operations manager, said: “These men were central to the violence and exploitation that UK crime groups deal in when it comes to supplying heroin through County Lines.

“Class A drugs cause misery and bring chaos to our communities.”

“We’re pleased to have taken this OCG out of action and we’ll continue to do our utmost to protect the public from this threat.”