A man who hid a handgun with a silencer under his garden hot tub has been jailed following a National Crime Agency investigation. 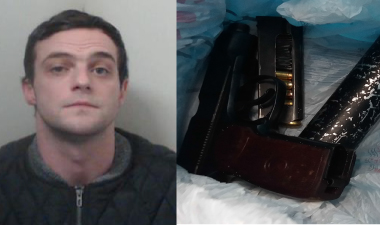 Dean Kirby, 31, from Manchester, who has now been convicted for the third time in 13 years for firearms offences, was sentenced to eight years and four months for possessing a firearm and other crimes including burglary and theft of a car.

NCA officers working with Greater Manchester Police executed a warrant on the morning of Saturday 21 October 2017 at Kirby’s home in Pinnington Lane, Stretford.

Following the search of the back garden, officers found a blue plastic bag underneath the decking area of the hot tub.  Inside the blue bag was a Makarov self-loading pistol, silencer and a magazine with six rounds of ammunition.   DNA found on the gun matched Kirby’s.

Kirby was not at the property at the time of the search. He was later arrested by GMP officers driving a stolen vehicle in May 2018.

“Kirby has a history of firearms possession and, from his previous offences over a 13 year period, we know he is also willing to carry a loaded gun in public.

“Given we found a silencer with the firearm, suggests an intention to use the weapon.

“The gravity of gun crime cannot be exaggerated. They are used to kill, terrorise and intimidate, as well as to further the commission of other serious crimes.  “

"Working with our partners from Greater Manchester Police, the NCA will continue to pursue anyone who uses guns to commit violence. We are committed to preventing firearms from reaching the hands of criminals."