A man wanted by the National Crime Agency for his involvement in the supply of class A drugs worth millions of pounds has been arrested in Lanzarote. 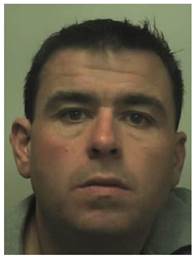 Gary Vickery, 38, originally from Dublin, previously admitted to having a leading role in conspiring to import class A and B drugs and money laundering.

In July 2021, he failed to attend court where he was due to be remanded in custody, and at the end of July a warrant was issued for his arrest. He subsequently failed to surrender to the court again at a further hearing in September 2021.

He was arrested on Wednesday 20 October at a bar in the town of Yaiza, south of Lanzarote, by officers from the Guardia Civil as part of a joint operation with the NCA.

Officers evidenced Vickery’s involvement in large scale drug shipments worth over £23 million at UK street value, as well as movements of cash, with two other men – Thomas Kavanagh, 53, from Tamworth and Daniel Canning, 42, originally from Dublin.

Kavanagh and Canning are both in custody awaiting sentencing after pleading guilty to conspiring to import class A and B drugs and money laundering. Canning also pleaded guilty to possessing a firearm and ammunition.

“Vickery was given ample opportunity to return to the UK following his guilty plea, but has failed to come back on every occasion.

“We will ensure those who cause harm to the UK though organised crime are held accountable, and this case highlights our tenacity.

“I’d like to thank the NCA officers here in the UK, and our international liaison team in Spain, who have worked closely with colleagues in the Guardia Civil to locate Vickery.”

Vickery is due to appear before a Spanish court this morning and extradition proceedings for his return to the UK are now in progress.