A truck driver who tried to bring an illegal firearm into the country has been jailed for two years and three months. 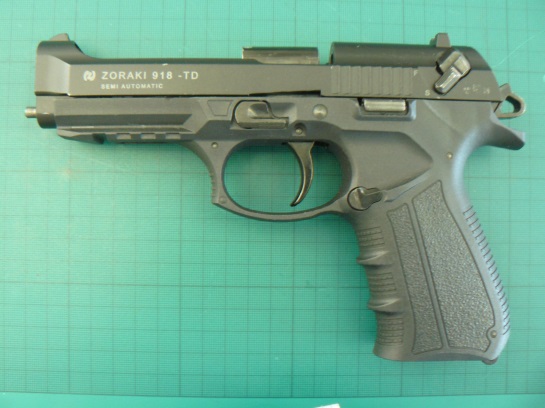 A truck driver who tried to bring an illegal firearm into the country has been jailed for two years and three months, following a joint National Crime Agency and Police Scotland investigation.

Officers from the joint Organised Crime Partnership unit were called in after a box containing 50 rounds of ammunition was seized by Border Force officers carrying out checks on incoming parcels at a distribution hub in Edinburgh, and acting on intelligence from the NCA.

The package was on the way to John Stewart’s home address in Cook Street, Kirkcaldy.

On 31 May NCA and Police Scotland investigators raided the 33-year-old’s property and arrested him on suspicion of importing firearms.

During a search a handgun was recovered from the living room, along with further rounds of ammunition. The gun was a blank firing weapon, but work had been started to convert it to fire live ammunition.

Later that day another handgun that was due to be delivered to Stewart’s address was seized in the mail system.

Today (Thursday 17 October) Stewart was sentenced at the High Court in Edinburgh after admitting importing and possessing firearms.

“The importation of firearms into the UK through post and fast parcel is a known threat we are actively targeting.

“What we see, and what happened here, is blank firing weapons which are legal elsewhere being illegally imported into the UK and then converted to fire live ammunition.

“Keeping these sort of weapons out of the hands of criminals is a priority for the Organised Crime Partnership, and we’re determined to do all we can with our partners to disrupt that supply line and protect the public.”

“We have recovered over 40 firearms across Scotland since 2018 and we will continue our operations and investigations in our aim to take dangerous weapons off our streets.

“Targeting those who attempt to jeopardise the safety of our communities will continue to be a top priority for the OCP, supported by local divisions.”

“The work of Border Force in seizing the ammunition and weapons was a vital early-stage part of this successful prosecution. Our officers do similar work every day at postal hubs across the UK, using their expertise to keep dangerous weapons and other banned goods out of the country.

“Following every seizure, intelligence is shared with law enforcement partners such as the NCA, in order that further action can be taken. This case is an excellent example of different agencies working together to identify and ultimately prosecute an offender.”