Gun smuggler with 60 firearms in car jailed for nine years

A man has been jailed for nine years after admitting smuggling 60 guns into the country in his car, as part of a National Crime Agency investigation. 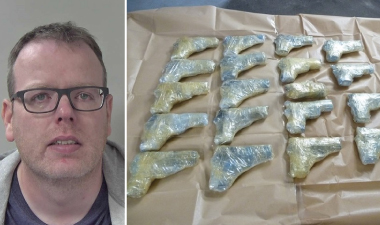 Irish national Robert Keogh, 37, was stopped at 5am on Friday 2 August this year by Border Force officers at the Port of Dover en route from Calais.

He had left the UK through Dover on 24 July and when questioned, told officers he was returning from Europe where he had “just been driving around”.

An initial search of his car, a Volkswagen Passat, recovered a Turkish manufactured Zoraki blank firing handgun, with its barrel converted to fire live ammunition. The gun was concealed in the car’s rear-left quarter panel.

Subsequent searches unearthed a further 59 firearms wrapped in plastic and concealed deep inside the car’s bumper and both rear quarter panels. None of the guns had serial numbers.

The find was believed to be the largest seizure of lethal weapons at a UK port.

In interview, Keogh told NCA officers that he had a 3,000 Euros gambling debt.

He also claimed the vehicle was out of his control for three days while he was abroad and thought money might have been hidden in it.

“The case against Keogh was so strong he had to plead guilty very early.

“Preventing firearms from coming into the UK is one of the NCA’s most important priorities, it is crucial in our mission to protect the public.

“The firearms belonged to an organised crime group whose plans were significantly disrupted by their loss.

“Without our and Border Force’s intervention, the weapons would have ended up in the criminal marketplace and then on to streets across the UK to be used in extremely violent crimes by extremely dangerous offenders.

“We work at home and abroad to prevent the flow of guns trafficked to the UK and Border Force is a vital partner in our work to protect the nation.”