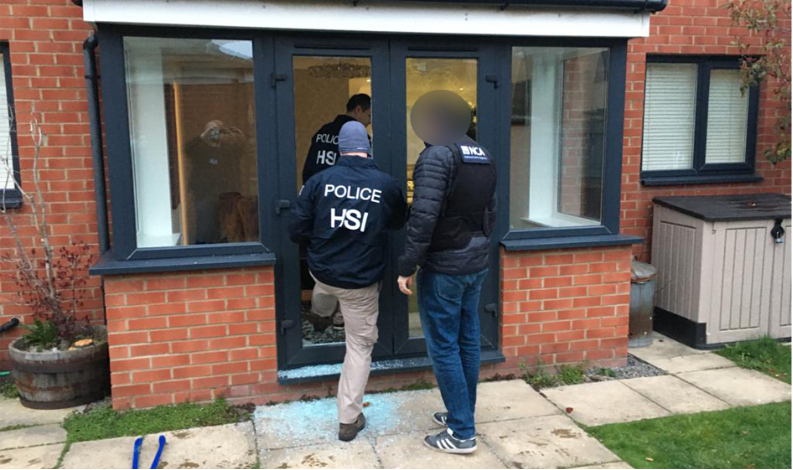 Suspected members of an organised crime group responsible for selling vast quantities of MDMA on the dark web have been targeted in raids across the North East and Surrey.

The National Crime Agency launched an investigation last summer after parcels of MDMA destined for addressed across the world were intercepted.

Analysis of messages shared on EncroChat – the encrypted messaging platform brought down as part of Operation Venetic – enabled officers to identify individuals believed to be involved in supplying the drugs and laundering money using cryptocurrency.

A total of 90 kilos of MDMA, 134 kilos of Amphetamine and more than 6000 Diazepam/alprazolam tablets, with a combined street value of £4.3 million, have been recovered during the investigation.

Two men, aged 24 and 31, were arrested today at addresses in South Shields and Hebburn respectively, on suspicion of importing and supplying Class A, B and C drugs. They remain in custody for questioning. An address in Epsom, London, was also searched, along with other addresses in South Sheilds.

“We have worked closely with partners in the US to target the individuals involved, who are ultimately preying on the vulnerable and destroying communities.

“This investigation shows that those who try to use the dark web and encrypted communication devices to anonymously commit crimes can be identified.

“There are two people from South Shields we are still seeking, who we believe are overseas. They know they are wanted, and I would encourage them to hand themselves in.”

US Homeland Security Investigations Attaché Eric Felman said: “One of our top priorities as an agency is to disrupt and dismantle international narcotic smuggling activities at home

and around the globe.

“The strong partnership between Homeland Security Investigations and the National Crime Agency continues to produce positive results in combatting organised international crime affecting both of our countries.”

Officers discovered the drugs were being imported from the Netherlands to the UK and then sold on the dark web under four handles – HundredsUK, Hundredsandthousands, Sundaefundae, and 100and1000s.

Packages containing MDMA, which were intercepted by NCA and Border Force officers in June and July last year, were destined for addresses in the UK, America, Israel, Norway, Thailand, Hong Kong and Kuala Lumpur.

One crime group member, Mubinar Rahman, aged 25, from South Shields, who was arrested last July and admitted posting over 100 packages, is due to be sentenced on 21 April at Newcastle Crown Court.