A convicted drug smuggler and his friend have been sentenced for attempting to import a pistol and 52 rounds of ammunition in the post from the United States.

It followed the discovery of a Sig Sauer weapon, along with magazines and ammunition, found by Border Force officers carrying out checks on incoming mail at an international parcel depot near Stansted Airport in Essex.

The weapon was recovered from a parcel containing computer parts, and had been sent from Oregon in the US. 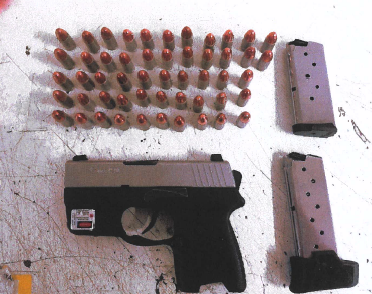 NCA officers found that Scott was using Hanna’s address to receive the item. Hanna then told Scott when the parcel had arrived at his property so he could pick it up.

A judge at Antrim Crown Court sentenced Scott to five years and four months in prison on 8 February. Hanna was sentenced to 18 months imprisonment suspended for 18 months today (15 December) at the same court. Reporting restrictions meant Scott’s sentence could not be reported until now.

Working with Homeland Security Investigations partners in the US, the NCA were also able to identify the shipper of the weapon as 34-year-old Lyle Justin Schirm from Oregon.

Schirm has pleaded guilty to sending the semi-automatic Sig Sauer weapon from the United States and is awaiting sentence.

“Kristopher Scott attempted to import a deadly firearm into Northern Ireland and thought that by using the postal system he would escape the attention of law enforcement. Bryan Hanna was complicit when he said his address could be used, and making sure Scott was alerted to its arrival.

“Through our joint working with partners in both the UK and US we were able to stop him from doing so, and ensure that both ends of this criminal conspiracy face justice.

“The NCA remains determined to do all we can to stop those who want to bring violence into our communities.”

“This was a concerted attempt to smuggle firearms into our country, demonstrating the lengths criminals will go to put profit before people’s lives. If this weapon entered our community it could have caused serious injury or death.

“We will continue to break any attempt to import deadly weapons into the UK and dismantle deadly supply chains.”

It is the second time Scott has been convicted following an investigation by the NCA. In September 2015 he was given a five year sentence after pleading guilty to importing class B drugs.