A career criminal who used a web of more than 40 aliases to stay on the run after absconding from prison in the early 1990s has been jailed for three years and eight months for attempting to smuggle eight illegal migrants into the UK on a yacht. 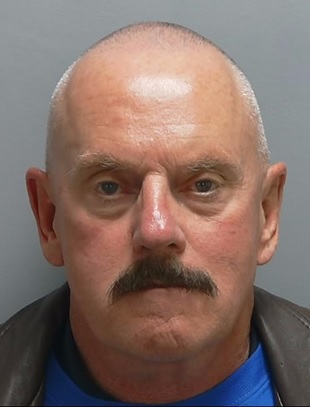 The National Crime Agency began an investigation into 64-year-old Charles Lynch, also known as Wolfram Steidl, after his vessel, the 46 foot chartered motor cruiser Saquerlotte III, was intercepted by the Border Force cutter Seeker and Coastal Patrol Vessel (CPV) Nimrod off the coast of Littlehampton, West Sussex on 6 November 2019.

Eight Albanian nationals were found on board, five men, two women and a child, and he was arrested on suspicion of facilitating illegal immigration. The vessel was escorted into Portsmouth naval base.

He initially claimed to be Wolfram Steidl, a German national. But checks by NCA investigators found that his true identity was Charles Lynch, wanted after absconding from Maidstone Prison in 1992. He was a year into a seven year sentence for theft, fraud and forgery at the time.

His UK criminal record showed dozens of previous convictions, largely for fraud and theft offences, dating back to 1971, as well as at least 40 known aliases.

NCA investigators believe Lynch had used some of those aliases to evade the authorities during his time on the run, and he was found in possession of a selection of false identity documents, including a Danish driving license and Romanian ID card.

He had also been convicted and jailed for a number of offences in France, including possessing indecent images of children, under another identity.

Analysis of the Saquerlotte III’s movements prior to Lynch’s arrest showed he had made a number of trips between France and the UK, with the vessel having travelled between numerous marinas along the south coast, including Brighton, Littlehampton, Portland, Dover and Weymouth.

Lynch pleaded guilty to one count of facilitating illegal immigration and two counts of possessing a false ID document. Today (Friday 26 February) he was jailed for three years and eight months at Portsmouth Crown Court.

He will also have to serve the remainder of his sentence from the 1991 conviction consecutively.

“People smugglers like Lynch have no concern for the safety of those they transport, they are only interested in exploiting the desperation of others for profit and their own greed.

“Since his initial arrest our investigators have been able to identify him as a career criminal who has been on the run from prison for 28 years. He was able to stay free so long by staying on the move and creating a web of aliases for himself. We suspect he has used dozens of different identities during his career.

“That such a dangerous man is now back in prison is testament to the work of NCA officers and our partners in Border Force, who played a key role in his capture.

“Together we are determined to do all we can to disrupt and bring to justice the organised criminals involved in people smuggling.”

“It was the unusual movement of the vessel – a pleasure cruiser speeding from the coast of Northern France in a straight line towards the UK after dark in November – that immediately aroused suspicion. Working with our colleagues at the Maritime and Coastguard Agency, who sent up their helicopter, we were able to bring Saquerlotte III to a halt after an approximate two mile pursuit.

“When we boarded the vessel we found that Lynch had gone to some effort to disguise his criminal intentions. His passengers were all wearing branded polo shirts and Lynch said he was providing them with navigational training. However, his story did not stand up to scrutiny. Most damningly, he could not speak Albanian and his passengers could not speak English.

“This was an important Border Force detection that was the crucial first step in putting a man with a lengthy criminal history back behind bars.”