A man who tried to smuggle heroin worth almost £1 million into the UK through Birmingham Airport has been jailed for nine years.

National Crime Agency investigators questioned Mohammed Uzair Rashid, from Greater Manchester, after he arrived into the airport on a flight from Sialkot in Pakistan, via Dubai, in November 2021.

CCTV cameras captured the moment (right) Border Force officers singled the 35-year-old out for a search, during which they found almost 18 kilos of high-strength heroin in his checked-in baggage. 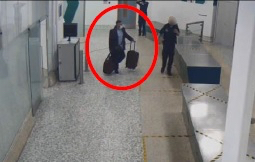 Rashid claimed the bags were not his, then that the packages had been planted inside.

NCA officers identified that Rashid had flown out to Pakistan on 29 September on a ticket booked the same day as his travel. He claimed to have taken more than £500 savings from his benefit payments on the holiday with him.

WhatsApp messages recovered from his phone showed he was in constant contact with someone he referred to as ‘Brother’ as he passed through the airport in Pakistan. In one message he was advised to “Remain tension free…God will be generous” as he walked through.

NCA forensic experts found that the packages (pictured in bag below) contained heroin between 66 and 71 per cent pure, with a street value in excess of £900,000.

Rashid eventually pleaded guilty to class A drug importation offences, and was sentenced today (13 May) at Birmingham Crown Court.

“Rashid’s story should be a cautionary one for anyone considering getting involved in drug smuggling.

“He might have thought he could make a bit of money on the side, but instead he is now serving a long and life-changing prison sentence.

“Heroin is a drug which fuels violence and exploitation in our communities, where we often see it sold by County Lines street gangs.

“This is why we are working with partners to do all we can to disrupt supply chains and track down those bringing it in to the UK.”

“The sentencing of Rashid is the result of hard work and dedication from Border Force and NCA to secure the UK’s borders and prosecute those that seek to smuggle illegal drugs into the country.

“Border Force’s work with the NCA to stop drugs entering the UK is a core part of the Government’s 10-year drug strategy to cut crime and save lives.”