The last man arrested as part of a National Crime Agency investigation into the alleged importation of cocaine and heroin has been extradited from the Netherlands to face the UK courts. 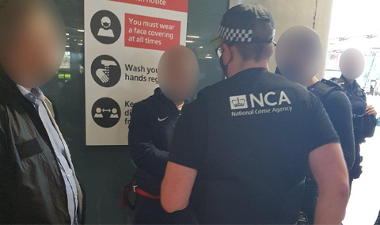 Yesterday (10 June) the Dutch national was brought to the UK by NCA officers following the conclusion of his extradition hearings in the Netherlands.

The gang he is alleged to have been part of was responsible for importing millions of pounds worth of class A drugs into the UK from the Netherlands hidden in loads of chicken in 2016 and 2017.

On three occasions, heroin and cocaine worth around £5 million was seized hidden in chicken shipments. However NCA investigators, working in partnership with the Dutch police, subsequently identified another 16 importations which they suspect contained drugs, which would have brought the overall street value to around £12 million.

Da Costa is alleged to have been part of the Dutch arm of the operation, where drugs were placed within consignments for shipment to the UK.

He is due to appear before Birmingham Magistrates’ Court today (11 June).

NCA Senior Investigating Officer Gary Winch said: “This case shows that there is no hiding place for those attempting to evade UK law enforcement.

“We are determined to track down fugitives, and neither the passage of time or international borders are a barrier to us doing so.

“We are grateful for the assistance of our Dutch partners in this operation, and Da Costa will now go before UK courts.”

Eleven people have previously been convicted in connection with the NCA investigation, with prison sentences totalling around 100 years handed out.

A further individual, Dutch national Shahzad Butt, 33, was extradited to the UK from the Netherlands in December 2020 as part of the same investigation. He pleaded guilty to conspiracy to import controlled drugs into the UK at Birmingham Crown Court on 16 April 2021 and will be sentenced following the conclusion of Da Costa’s court proceedings.