45 years for importers of lethal handguns

Two men jailed for smuggling 95 firearms into the UK

Two men who conspired to import 95 lethal handguns into the UK have been jailed for a total of 45 years, following an investigation by the joint NCA and Metropolitan Police Organised Crime Partnership (OCP).

Denis Kolencukov, 26, was arrested on 1 July 2017 after 79 handguns and thousands of rounds of ammunition were seized by Border Force officers based at Coqeulles, France, following information supplied by the OCP.

The weapons were hidden in specially adapted concealments in engine blocks on the trailer of a van which was en route to the UK.

The driver, a Polish courier, had collected the engines from Kolencukov at the Orlen petrol station in Boleslawiec, Poland, the previous day, unaware of their lethal contents.

A diary seized from the courier had entries detailing six other previous importations conducted by Kolencukov, all of which were believed to contain firearms and ammunition.

Phone records showed that before each trip to the continent, Kolencukov was in contact with Stephen Spires, 38, with the level of contact between them increasing on his return. 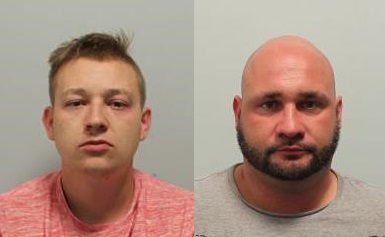 Investigators believe the pair were discussing the imminent importations so that Spires could make the arrangements for their onward distribution.

On 3 July 2017, OCP officers conducting surveillance on an industrial Estate in Seaborough, Slough, watched as Spires and Michael Nicholls, 28, removed items from a shipping container and attempted to drive away in a van.

With support from armed Thames Valley Police officers, the van was stopped and the pair were arrested. Nine firearms were recovered stashed in a plastic carrier bag in front passenger foot well.

Officers discovered another firearm in the shipping container, and a further six were recovered in police operations across the UK, bringing the total seized as part of this operation to 95.

Today at Kingston Crown Court, Kolencukov was sentenced to 19 years and two months in prison and Spires to 26 years. Nicholls will be sentenced at a date to be confirmed.

Tony O’Sullivan from the Organised Crime Partnership said: “The sentences handed down to these men today reflect the severity of their crimes and the danger they knowingly posed to the British public.

“Not only were all 95 firearms viable weapons, they were packaged up with thousands of rounds of ammunition. I have no doubt they would have been sold for profit on the criminal market.

“Although the level of gun crime in the UK remains one of the lowest in the world, we know that handguns like these are still the most commonly used firearms.

“They are easily concealable, making them the firearm of choice by criminal groups, who use them to bring fear and violence to streets of the UK. Stopping their onward distribution has protected the public and no doubt prevented gang-related shootings.”